Participating in hackathones – is it worth it?

All night programming, innovative solutions, and often a trip to another city or country. What does really participating in hackathons give you and is it worth getting involved in? These and other questions are answered by Marcin Matłacz, Data Analyst at Sii Business Intelligence Competency Center, whose team won the 3rd place this autumn at Hackathon Bizreach in Tokyo!

What has been your previous experience in participating in hackathons so far? Is Bizreach in Tokyo your first hackathon?

M.M.: I have participated in 27 hackathons so far and won 10 of them. Taking part in hackathons, I visited Spain, Switzerland, the Czech Republic, Canada, the USA and recently Japan. The first event I took part in was KaktusHack, the first hackathon organized at the Warsaw University of Technology by EEXOR. The student organization had no budget, so there were no awards, but they still managed to gather a lot of people who simply wanted to meet and program together. It was a really beautiful event, people from various departments signed up, and it was the first hackathon for each participant. Because there were no prizes, everyone just simply had a good time. At the end, each team presented their project and explained how they implemented it. I met many people from this event later at other hackathons, one of them even in Switzerland.

Where did the idea to participate in the last hackathon in Tokyo come from? What made you do it? The awards, long-distance travel prospects or maybe the subject of the event?

M.M.: My colleague came across an advertisement for the BizReach hackathon browsing Instagram 🙂 We noticed that the organizer covers all costs related to flight, accommodation and meals which was a big plus, and it’s been almost a year since our last competition. We decided to gather the team and just go.

Who was a member of your team besides you? What were the functions of each person in the team? How did you find other members?

M.M.: We flew out of Poland as two back-end programmers – data analyst and big data developer. One from Warsaw, the other from Krakow. On-site during the opening event, our team was joined by programmers from Hong Kong, from Austin, Texas and a programmer from Los Angeles, California. As soon as we started talking, we saw that together we have all the necessary skills and get along well.

You are a Data Analyst yourself – hackathons are usually associated strictly with programming teams. What is the function of the analyst during such an event?

M.M.: Data Analyst is just my professional title. I worked on hackathons in a lot of different technologies. I wrote back-end, front-end and mobile applications. I programmed in Python, Java, JavaScript, TypeScript, Flask, Falcon, Django, Node.js, JavaFX, Spring, jQuery, Backbone.js, Ember.js, Angular, React.js, Vue.js. I prepared data analysis and built machine learning models. As an analyst I dealt with the analysis of available data and preparation of functions calculating the metrics we set, and as a programmer I implemented some of the endpoints in the API.

Your team has faced 38 other teams selected from 3,800 who signed up. What criteria had to be met to qualify for the competition?

M.M.: The first step was to send your CV and complete the survey. The next stage were two programming tasks in any programming language. These were algorithmic tasks involving the implementation of an algorithm that solves a given problem in an optimal way in terms of time and memory complexity.

M.M.: The challenge presented by the organizers was to visualize the skills of the programmer based on the profile on GitHub. We started our work by defining the problem and determining the features of a good / bad programmer. We have created a list of functionalities that we could implement and divided into three groups. The first consisted of the necessary ones, the second one would be nice to have, but if we run out of time we can skip them, and the third group are all rejected functionalities that were too complicated to implement in 48h or were too difficult to describe in technical language. The next step was to divide the tasks and start programming / analytical work. 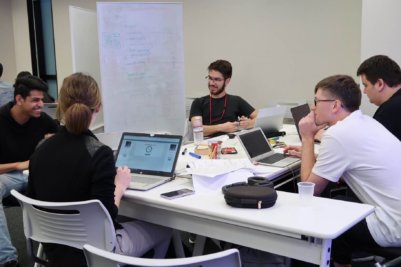 Finally you came in 3rd place – congratulations! 🙂 How did you do it?

M.M.: By planning our work really well and keeping peace of mind 🙂 During the first day we implemented functionalities from the first group, so we didn’t have to stress because we knew that we already have our MVP (Minimum Viable Product). We decided to spend the evening going out together to get to know each other and see interesting places in Tokyo. We spent the second day of hackathon implementing a few additional metrics and high functionality from the second group, as well as preparing presentations. The main features of our project were metrics showing how well the programmer copes with solving pull requests, what is the quality of his comments and whether they are helpful and what quality the code is written by him, whether he tests his code and how he copes with managing public repositories.

Do you think that you can prepare for such a hackathon? If so, how?

M.M.: You can probably do it to some extent, but what’s the fun in it 🙂 It’s definitely worth reading the event description carefully. I think that it is enough to start thinking of possible solutions, several of which may be worth implementing. Hackathons are a programming celebration and the opportunity to meet new people. If you assume that you are not going there for a reward, then preparing does not make sense.

What is most valuable about participating in such an event? Of course, apart from the prize, if you win 🙂

M.M.: As I mentioned, the opportunity to meet interesting people from around the world! The opportunity to see new places, gain knowledge about new technologies – at hackathons there are often workshops organized by companies sponsoring events.

What would be your advice to people who would like to participate in their first hackathon?

M.M.: There are many sites where you can find an interesting hackathon such as ChallengeRocket, MLH.io, as well as hackathon hackers groups on Facebook. My advice is to go as soon as possible! 🙂