Since the first discovery of the Ultra-wideband technology (in short: UWB) it was continuously researched and even used in several specific areas. However, it took about one century for companies to start using it in a commercial products which are accessible by everyone.

So how UWB differs from other commonly used wireless interfaces, where is it used and why we believe it may change the approach to the communication?

The research on the UWB technology started right along with the discovery of the radio communication in general. It is said that the birth date of the UWB was around 1885 when the Guglielmo Marconi used spark-gap transmitters for radio communication (Morse Code) over the Atlantic Ocean. For few next decades it was researched, and its capabilities were being defined. During World War 2 and following years it turned out that using UWB technology it was possible to identify the speed, location, and direction of the objects in space. That is how the RADAR [Fig1] was invented (1950/60s). 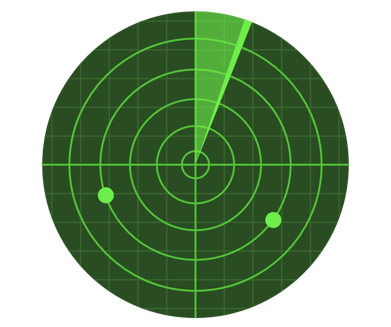 Of course, the usage of the UWB back then was quite different than how it is used now in the commercial market, still the main principles were the same, we will discuss them later.

Due to its military possibilities, UWB usage was restricted in USA until 1990. After 1990 first commercial, licensed products were released and finally, in 2002, FCC (Federal Communication Commission) has allowed the unlicensed usage of the UWB. It took almost next 2 decades for the market to get the maturity of UWB chips good enough to be released for the regular customer.

As it comes to the UWB related standards, these were introduced and improved quite dynamically. To list a few of them [Tab1]:

As of the date this article is being written, the last one is the latest of the IEEE Standards for Low-Rate Wireless Networks.

UWB is now covered by the UWB Alliance (formed in 2018, members list includes but is not limited to Hyundai, Apple, Samsung, Decawave) and FiRa Consortium (formed in 2019, includes Samsung, HID, AssaAbloy, Hyundai and more).

Ultra-wideband is a wireless technology allowing to transmit data in a short range with high throughput. It is usually defined as follows:

Thanks to the main characteristics of UWB is possible to keep the high data ratio while spreading the radio energy across the extremely wide frequency band, causing it to be almost negligible for the narrowband transceivers (like the environmental noise).

Typical UWB interface can be called as carrier-free technology due to its nature (still we must remember that we can use UWB as a carrier-based communication interface as well!). Usually, other Radios interfaces use a sine wave RF carrier for the wireless communication, while UWB uses short, time domain, modulated high-frequency and low energy pulses [Fig3]. This allows it to potentially achieve a data rate greater that 100Mbps (it is assumed that 480Mbps could be achieved for a short range) and not causing significant interference. Still, such numbers are rather theoretical only and much lower data rates are used in real applications.

LRP is usually used for RFID related applications where the high data rate is not needed. It can work in one of three modes:

Each of the PHYs is limited by the predefined bands as described in the table below [Tab3]. For HRP PHY, each of the band group has its own mandatory channel. Usually, the bandwidth is 499.2MHz however it can be up to 1335.4MHz for channel 15. Table 2 UWB PHYs for IR-UWB 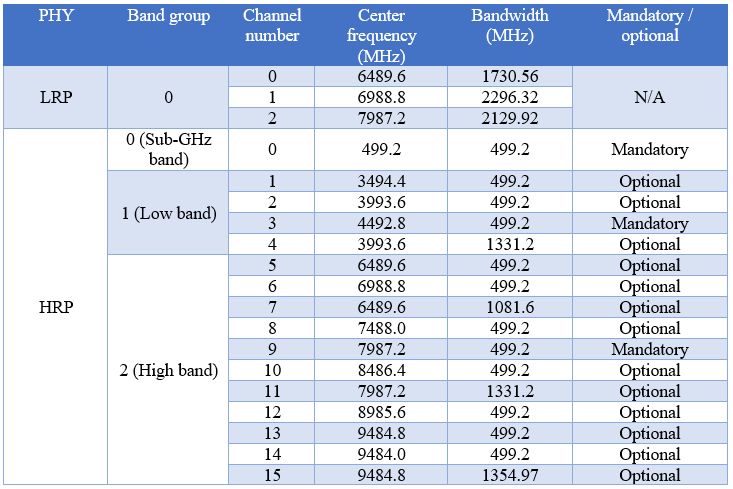 Multiple different signal formats are used nowadays. Below, the most typical use-cases are described.

UWB signals can be modulated in pre-defined schemes. Few of them are listed below:

Picture below [Fig6] shows the comparison of the signal modulation schemes. 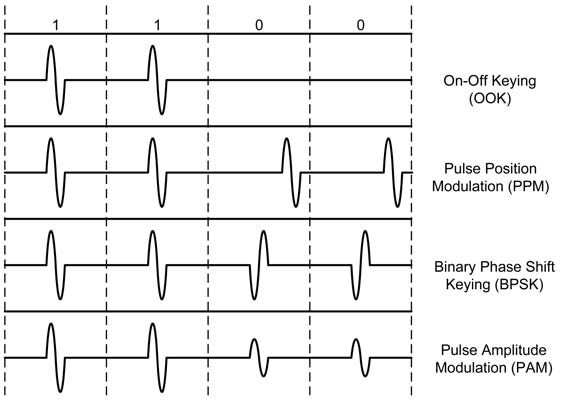 So why are we actually interested in the UWB technology? Due to the specification of the UWB, this technology has some big advantages over the narrowband communication. The main of them are listed below. 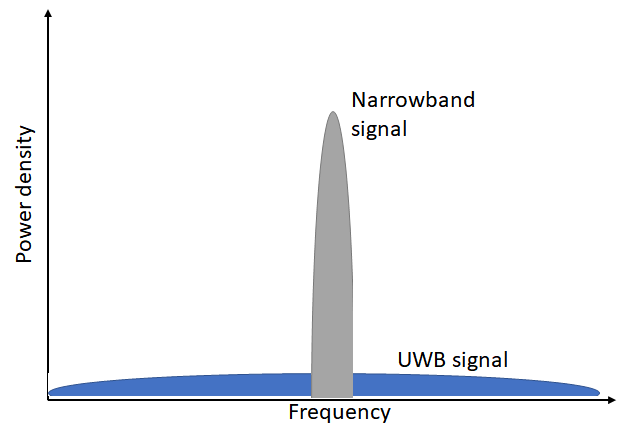 According to this equation, channel capacity is directly proportional to the bandwidth. 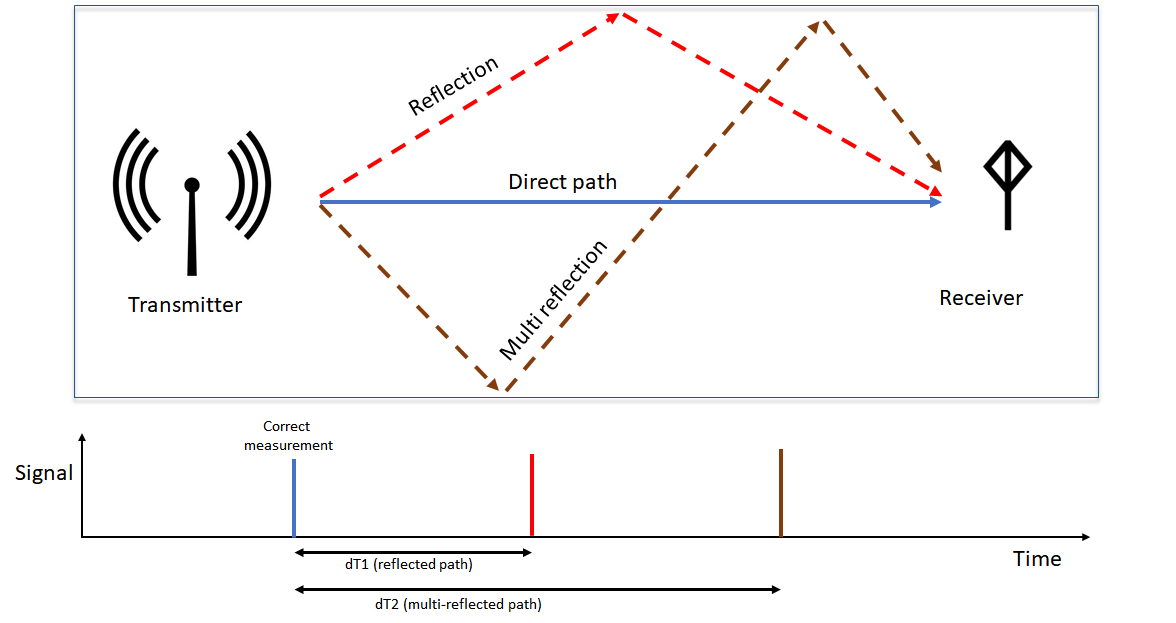 Extremely short duration of the UWB pulse means that there is a very show window for the reflected pulse to collide with the correct, line of sight pulse.

Ultra-wide band technology is slowly getting to be used in a variety of different areas: from the smart home, through medical up to industrial / enterprise markets [Fig9]. 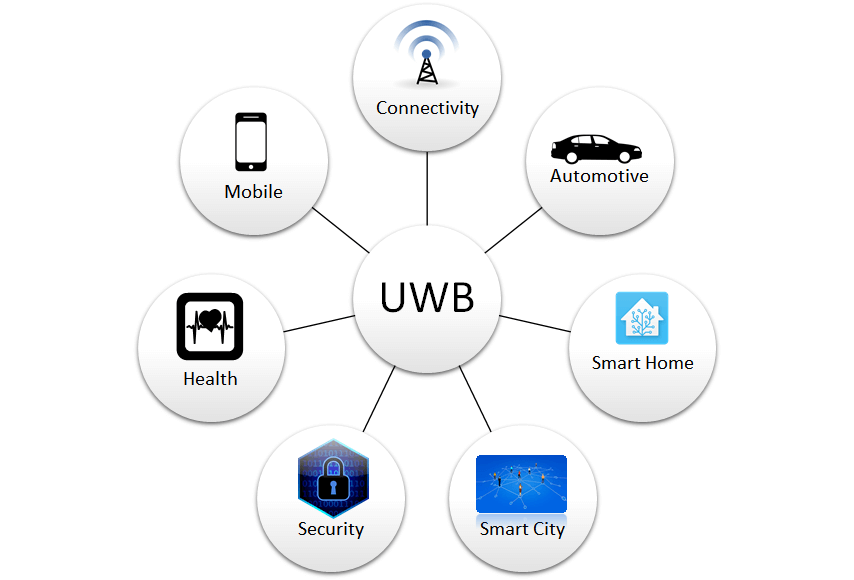 Thanks to its advantages we can define a several of the use cases where the UWB is already used, and more are definitely incoming.

One could say that it is quite similar to other commonly used interfaces like BLE or NFC however the basic principles of the communication technology are quite different. It is said that UWB based radio is going to play a key role in the future of wireless communication.

In this chapter we tried to just summarize the potential hidden in the ultra-wideband technology which is being slowly discovered and used in the commercial applications. In the next article (VOL2) we will take a closer look to the UWB frames and how they are encoded / decoded. 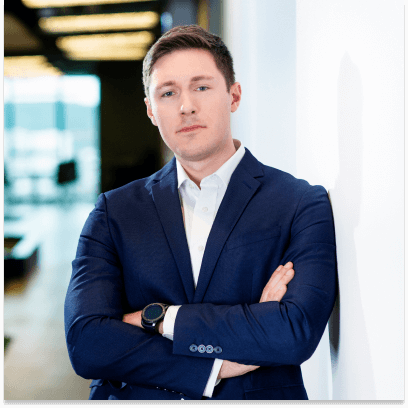 Autor: Michał Szczypior
System architect, working in the embedded world for more than 10 years. Specializes in the security / crypto operations and communication protocols. Currently focusing on the access control systems.