During the 13th European Economic Congress (EEC), the companies awarded with the honorary “Investor Without Borders” title have been announced. Sii Poland was among the four winners of the “Polish investor abroad” category. The award was granted to the most effective Polish investors pursuing foreign expansion. The award ceremony took place on September 20 in Katowice during the gala accompanying the event.

Sii Poland has once again proved that it successfully implements its development strategy on foreign markets – the company received the prestigious “Investor without borders” title in the category of “Polish investor abroad”. The organizers of the event awarded Sii for becoming the leader of IT and engineering services in Poland in a short time, providing them on a competitive global market. 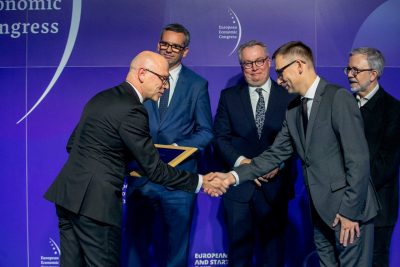 – It is an important distinction for us and a motivation for further work. Especially this year, when we are celebrating our 15th anniversary. Without the commitment of our over 6 000 experts and the trust of our customers, we would not be here today. We started as a one-man startup, and today Sii is a large organization, we cooperate with leading brands from various sectors, operating all over the world. We are glad that we can add the title of “Investor without borders” to our successes, but we do not intend to rest on our laurels – says Ryszard Pytko, Chief Commercial Officer at Sii Poland.

On what terms is the “Investor without borders” title awarded?

“Investor without borders” is a title awarded since 2017, aimed at promoting exemplary – partnership, transparent, based on trust and responsibility – relations between the investor, the market and the administration. The candidates for the award were nominated by representatives of business, economic self-government institutions, agencies and government administration. The award criteria were, among others, the scale of investments and their impact on the potential and innovativeness of the Polish economy, as well as the importance of investments for the domestic market and for building Poland’s brand in the world.

During this year’s gala, the title was also awarded to: IKEA in Poland, Amazon in Poland, InPost and the Amica Group.

500 specialists and 10 years on the market – Sii Lodz has two reasons to celebrate!

The (not that) difficult art of remarketing with Salesforce Marketing Cloud

Safe journey with Sii Poland – how to implement projects based on the Safety Integrity...

See how Sii engineers support PAYBACK in the development of a loyalty platform for...

HR, consulting, marketing… You name it, we’ve got it. Explore the varied projects...