The name Kubernetes comes from Greek and means helmsman or pilot. It is the root of governor and cybernetics. K8s is an abbreviation obtained by replacing the eight letters „ubernete” with the number 8. In this blog post I will give you a small introduction to Kubernetes and walk you through the installation process.
What is Kubernetes (K8s)?

Kubernetes is an extensible and portable open-source platform for managing services and workloads. Kubernetes facilitates automation and declarative configuration, which is one of its great advantages. It has a large and very dynamically growing ecosystem – tools and services, as well as Kubernetes support, are available on hundreds of websites on the Internet.

Why should you use Kubernetes?

Kubernetes helps you control resource allocation and traffic management in your applications and microservices in the cloud. It also helps to simplify various aspects of service-oriented infrastructure. Kubernetes lets you know where and when your container applications are running, and helps you find the resources and tools you want to work with.

The rise of a revolution

Kubernetes was born as Google’s internal container orchestration solution and its original name was “Project Seven of Nine”. A familiar name for fans of the Star Trek series.

The Borg system – “I’m your father K8s!”
The beginning of the birth of our hero dates back to the beginning of the twenty-first century. At that time, Google started a small project involving around four people, aimed at creating a new version of a search engine. This is how Borg was born. A cluster management system capable of running thousands of jobs, from thousands of different applications, across multiple clusters, each with up to tens of thousands of machines.

For a decade Google programmers decided to undertake a long modernization task by rewriting the Borg code (originally in C++) in Go language. The system received important improvements, among which we can mention the new cluster management called Omega, which introduced great scalability for large computing clusters.

But it wasn’t until 2014 when K8s officially appeared and was introduced to the community of programmers and developers as an open-source version of the Borg system. A few months later, seeing the great potential of this technology, companies like Microsoft, IBM, RedHat, Huawei and Docker joined the K8s community. There is no doubt that the most important step that Google took was collaborating with The Linux Foundation to create The Cloud Native Computing Foundation, known as CNCF.

During the last five years, and after the debut of Minikube (a tool designed to facilitate the local management of K8s), we have witnessed a very dynamic evolution of K8s around the world. The (r)evolution that seems to have no end that day by day offers us better solutions.

What Kubernetes is not

Kubernetes operates at the container level and not at the hardware level, and the fact that it offers services very similar to Platforma as a Service, such as deployments, scaling, load balancing, logs, etc. does not strictly classify it among PaaS. K8s is not a monolith and the solutions it offers by default are optional and interchangeable. 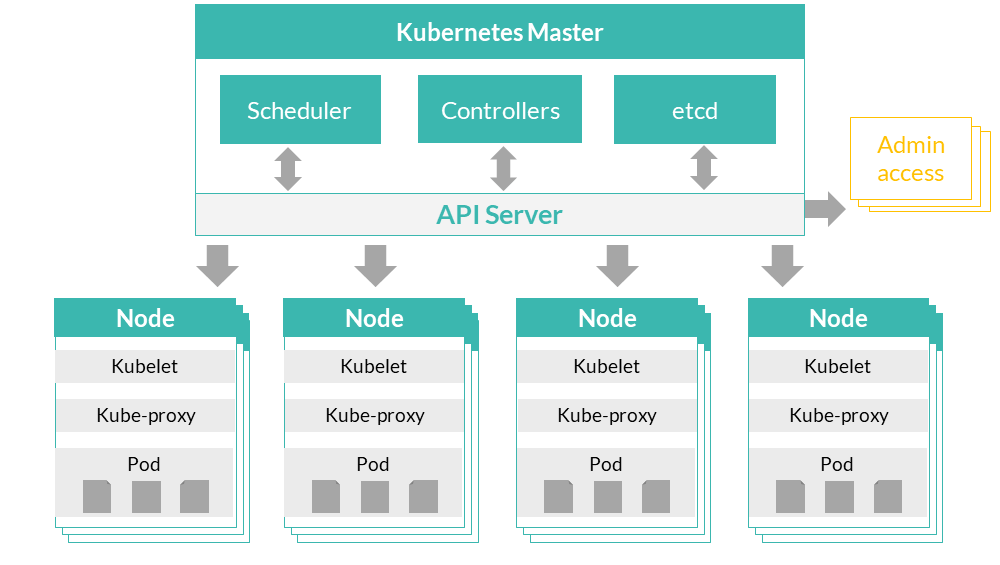 Now better move on to practice… so much theory is boring. We can find the theory on the official Kubernetes pages.

For beginners, who are not yet experienced with multi-container deployment, Minikube is probably the best option to start. Minikube is an open-source tool that was developed to allow system administrators and developers to run a single node cluster locally and is great for learning the basics, before moving on to Kubernetes.

What do we need?

a) create a yaml file as mine

b) now create the pod and start it

If you wish see what is happening while the pod creation, use the following command: watch -n 1 kubectl get pod in a new window terminal

c) and voilà! our first pod created and running

d) For detailed information about the pod (if needed) we simply use: 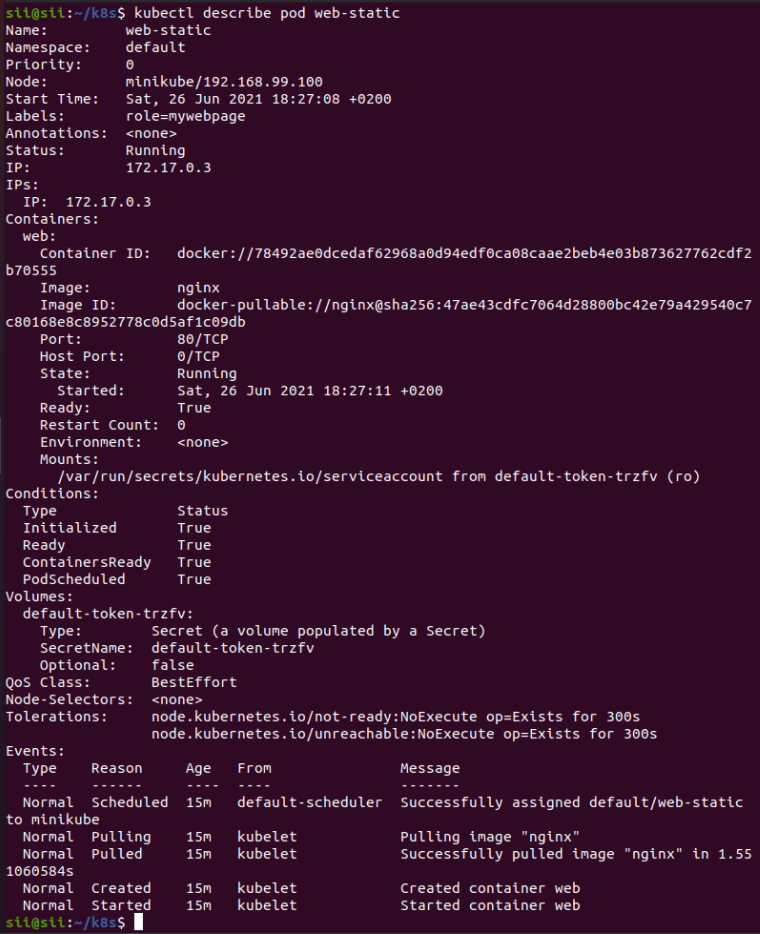 e) for remove pod, simply use:

For the kubernetes cluster management I recommend run kubectl – help in terminal or visit https://kubernetes.io/docs/reference/kubectl/overview/

7. To access our minikube node cluster, we use the SSH protocol. it’s as easy as that! 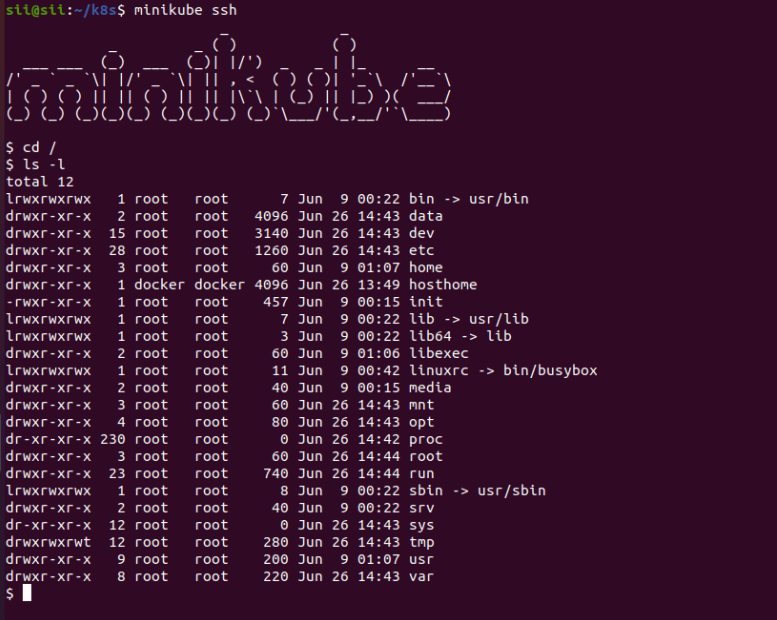 Today everything is aimed at being containerized, I mean the fact of packaging a software application to be distributed and executed through the use of these software containers.

I understand that not everyone knows the term, but if you work in the world of software development, you should start to learn more about it, as it has been a real revolution in the software industry in recent years. Thanks to containerization, developers have been able to become independent from the sysadmins and adopted the concept of DevOps more openly and easier to understand. Now the code creation and its distribution are comfortable. 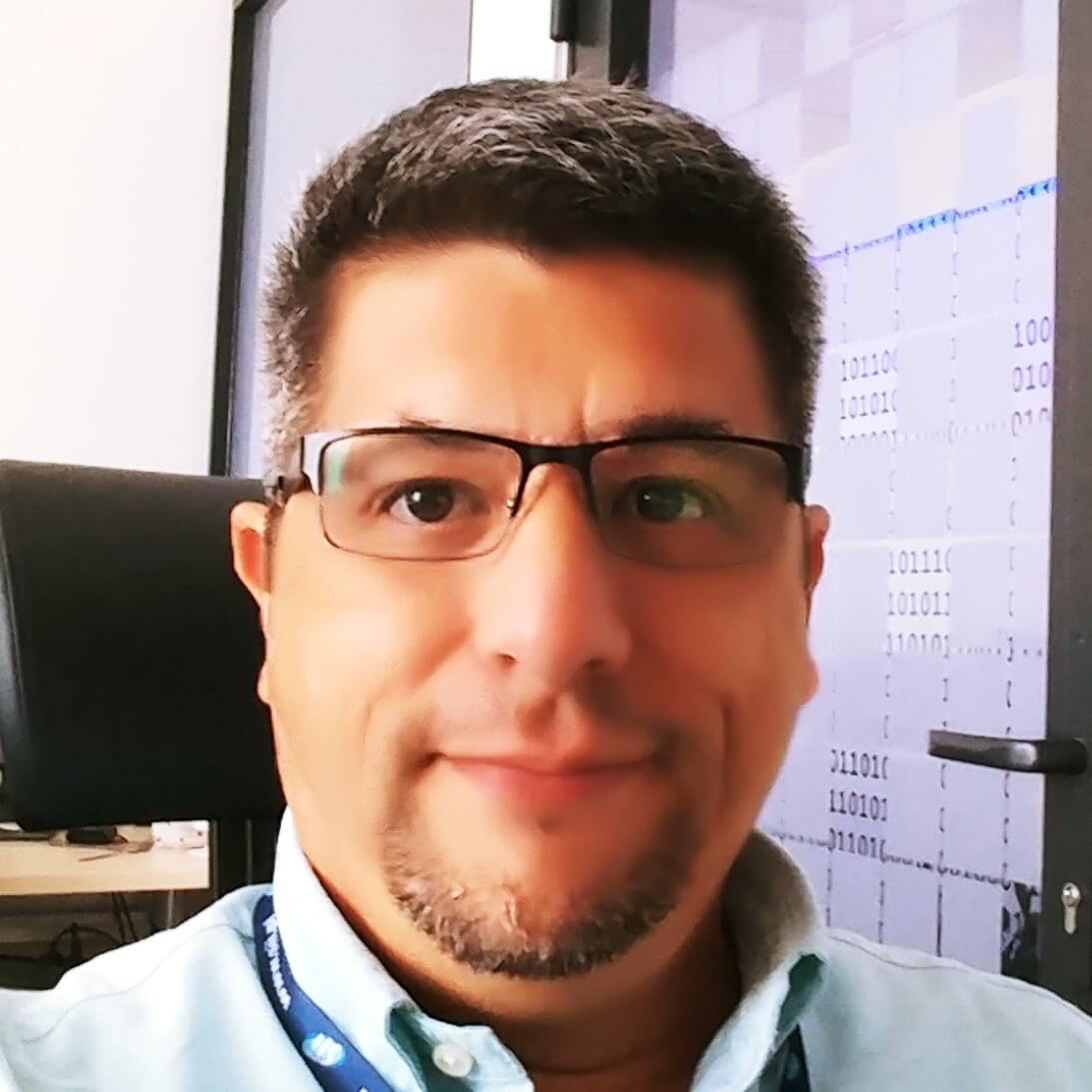 Autor: Carlos Troetsch Flor
A great enthusiast and follower of new technologies where the most important thing is how they change people. He has been linked to Sii for almost two years. As the second and, partially, the third line of support for different applications and technologies such as Kubernetes, he broadens his knowledge and experience. In his free time, Carlos is a fan of astronomy and Raspberry Pi projects.